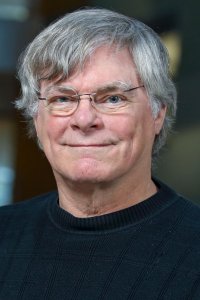 Dan Vogt was a member of the Ohio Wesleyan University Department of Chemistry from 1979 to 2021. Vogt received his B.A. with an ACS-certified major in Chemistry from Washington and Jefferson College. He earned his M.S. and Ph.D. in Chemistry (with a biochemistry emphasis) from Northwestern University under the direction of Irving Klotz. Vogt taught General Chemistry, Biochemistry, and The World of Chemistry, as well as Advanced Topics seminars in Neurochemistry and Mechanisms of Enzyme-Catalyzed Reactions.

As a graduate student, Vogt studied chemical modification of hemoglobin as a means of alleviating the erythrocyte sickling phenomenon in sickle cell anemia. His research included the investigation of chemical modification of proteins, including pharmacologically acceptable chemical agents that will penetrate the erythrocyte membrane and modify hemoglobin. He has also done research involving recombinant DNA studies of hemoglobinopathies such as γβ-thalassemia.

Vogt has a wife, Marjorie, and three daughters: Brynna, Gretchen, and Rebecca, hence the gray hair. In his spare time, he enjoys reading, golfing, watching movies, and listening to all kinds of music. He was the advisor for Delta Delta Delta sorority, and his expansive acting career has led him to play a Welsh rebel, a rich mill owner, a marine sniper, a dead guy, a blind grandfather, and a blind date afraid of everything.