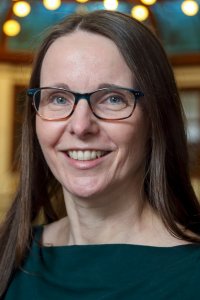 Andrea Colvin grew up in northern Germany and moved to the United States after graduating from high school. Once in the U.S. she started studying Spanish and fell in love with the language as well as Hispanic culture and literature. She joined Ohio Wesleyan in 2009 after earning her Ph.D. in Spanish from the University of California, Irvine. She was granted tenure and promoted to Associate Professor in 2015. That same year she received OWU’s Bishop Frances Kearns Award for Outstanding Faculty Scholarship, Service and Leadership Within the Classroom and the Community.

Dr. Colvin teaches Spanish language at all levels and specializes in courses on Latin American literature, culture and film at the advanced level. These include The Child in Contemporary Latin American Literature and Film, Latin America and the Quest for Identity and Remembering the Dirty Wars in Argentina, Chile, and Uruguay.

She has traveled with students as part of the OWU Connection on many different occasions, including as director of OWU’s study abroad program in Spain (2011-2013), during a Travel-Learning course on Mexican Migration (2014), as part of a Spring Break Service-Learning trip to Nicaragua (2015) and most recently on a Theory-to-Practice grant funded trip with two students to Buenos Aires, Argentina (2019). During the following semester, Dr. Colvin and the two students gave a joint presentation at the Ohio Latin Americanist Conference about their experience in Buenos Aires.

Dr. Colvin’s research focuses on 20th and 21st century cultural productions from the Southern Cone, particularly on questions related to the representation of political violence and trauma and the creation of a culture of remembrance after the military dictatorships in the 1970s/80s. She has received grants that have allowed her to spend a sabbatical in Argentina (January-April 2016) as well as travel to Quito, Ecuador, to present at a conference and learn more about Ecuadorian culture.

She loves being in the classroom with students and is passionate about continuing to grow as a teacher. She has attended several Teaching & Learning conferences and participated in numerous pedagogical workshops and webinars.

From 2017-2020 she served as Chair of the department and she is currently assisting students in many different ways as the Interim Associate Dean for Academic Performance and Advising.

In her free time, she enjoys spending time outdoors, traveling (especially to Latin America), watching movies with friends and spending time with her husband and her rescue dog, Coco.