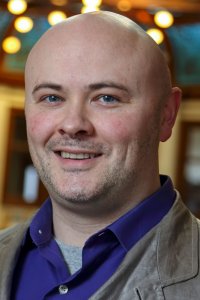 David Counselman received his doctoral degree in Hispanic Linguistics from Penn State in 2010. He specializes in second language phonological acquisition and has particular interests in issues related to learning new speech sounds and the perception of a foreign accent, including the degree to which the perception of a foreign accent is a listener’s phenomenon. His research supports the notion that students of Spanish improve their pronunciation in Spanish when they receive instruction on phonetics and phonology. His research also suggests that the earlier students receive this instruction in their Spanish studies, the better. Other recent research projects have investigated the degree to which heritage speakers of Spanish differ from native speakers in the way they syllabify words in Spanish and the way they use gender with adjectives that describe epicene nouns.

Dr. Counselman teaches Spanish courses at all levels, including basic language courses designed to initiate the acquisition process in students, intermediate-level courses designed to help students improve their written and oral communication skills, and advanced-level courses that aim to help students gain additional fluency while learning specific course content. His advanced-level courses in Spanish linguistics include, among others, Spanish Phonetics and Phonology and Spanish Bilingualism, a course that focuses on what we know about language acquisition and the cognitive impacts of being bilingual. Dr. Counselman has also worked with many students on independent projects, and through the combination of his advanced-level courses and direct mentorship, a recent OWU graduate was accepted into the graduate program in Spanish linguistics at the University of Florida. He is always excited to work with students interested in linguistics, regardless of the language(s) in which they may have an interest.

In addition, Dr. Counselman loves to travel and has traveled with students to Spain (through OWU’s study abroad program in Spain) and France (through theory to practice and travel learning grants) on several occasions. As an undergraduate student himself, he spent summers in Mexico, France and Venezuela. He has presented his research at conferences in Colombia and Argentina and has also been to the Spanish-speaking countries of Peru and Uruguay. He also loves learning languages in general and in additional to his near-native-like use of Spanish and conversational proficiency in French, he has studied German (3 semesters formally), Italian, Portuguese, Chinese and Japanese.

Furthermore, Dr. Counselman has served as the director of OWU’s study abroad program in Spain (2014 – 2017), the Chair of his department (fall 2016 and July 1, 2020 to the present), and the EEO Commissioner / Inclusion Advocate on 4+ job searches. He also served over 4 years on OWU’s Academic Policy Committee, chairing it one year (2018), and currently serves on OWU’s Academic Planning and Allocation Committee.

Lastly, in his free time, Dr. Counselman tends to talk about being from the South and generally impresses those around him with his ability to never stop talking about languages and linguistics.