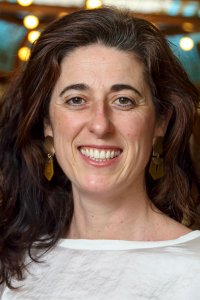 Associate Professor of Spanish and
Director of Film Studies Program

Eva Paris-Huesca completed her doctoral dissertation at the University of Massachusetts-Amherst in Hispanic language and culture and holds a Certificate in Film Studies. She started working at OWU in 2014, she was promoted and granted tenure in 2020 and is currently the director of the Film Studies Program. Her upper level courses and research focus on contemporary Spanish literature and Spanish women´s cinema. Of special interest to her is the study of Spanish crime fiction from the lens of historical memory, gender studies, cultural studies and feminist film theories. She is currently working on her book project, Compromiso, cine y género: Cineastas españolas del nuevo milenio, co-authored with Dr. Dosinda Alvite (Denison University).

Dr. Paris-Huesca regularly teaches introductory and intermediate language & culture courses, including Spanish for the Professions, Artistic Expressions of the Hispanic World and Spanish in the Medical Field, as well as the following upper level and specialized courses:

In her classes, Dr. Paris-Huesca uses cinema and literature as a pedagogical tool so that learners can place language and culture into context and see the social, political, historical, and cultural complexities and transformations of the Spanish-speaking worlds. She wants her students to question stereotyped perceptions, gain an enduring knowledge of the different existing languages officially spoken in Spain, and have a more profound exposure to diverse cultural viewpoints. Dr. Paris-Huesca subscribes to a holistic means of teaching, in which the student and the professor are both responsible partners for the learning. This view contributes to learning languages as alive and ever evolving structures that are part of our worlds and our experiences. This philosophy of partnership is the thread that runs through the numerous courses she has taught and the various projects that students develop: video essays, short films, and professional portfolios are some examples.

Since her arrival at OWU in 2014, she has supervised numerous honors thesis, research grants and other academic projects, and she has been involved in the organization of cultural and academic events on a regular basis, including the annual Hispanic Film Festival. She has travelled with students to Barcelona and the Basque Country through the Spanish Crime Fiction Travel Learning Course and is planning another travel learning course to Spain to complete a portion of the Camino de Santiago with her students.