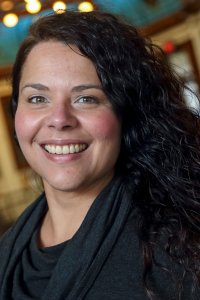 Dr. Glenda Y. Nieto-Cuebas is an Associate Professor of Spanish and the George and Louise Peters Professor of World Languages and Cultures. She is originally from Puerto Rico, where she earned a B.A. in Fine Arts (Universidad Interamericana, San Germán) and a M.A. in Hispanic Studies (Universidad de Puerto Rico, Mayagüez). She received a PhD in Hispanic Literature at the University of Massachusetts, Amherst. Before teaching at OWU, she was a Lecturer of Spanish at Amherst College.

Her upper level courses, publications, and research focus on studying Early Modern Spanish Literature, especially 17th century theatre and its contemporary productions. Due to the complexity these texts can convey for undergraduate students, in her classes she often employs hands-on and project-based assignments to help learners obtain a better understanding of this literature and also to have unique and engaging experiences that would be difficult to access otherwise. She has designed numerous academic projects and worked one-on-one with students interested in Early Modern Spanish Theatre. Some of these collaborations include: adapting, producing and performing plays for a live audience; an Internship focused on translating and adapting medieval romances for a professional shadow puppet show; Theory to Practice Grants and Student Independent Projects Grants that have included research, travel to theatre festivals (in Spain and the U.S) and workshops with international theatre companies (from Spain and Mexico); and presenting at professional conferences with students, among others.

Nieto-Cuebas is co-editor of the volume Social Justice in Spanish Golden Age Theatre (2021, University of Toronto Press) and has published several book chapters, articles and interviews in peer reviewed journals, including: Comedia Performance, e-Humanista, Sixteenth Century Journal, Romance Quarterly and Romance Notes (forthcoming). She has been working on pedagogical projects and publications focused on how experiential learning can help students better analyze Hispanic classical theatre through non-traditional means. Most recently she is co-authoring a monograph that focuses on how Latinx theatre practitioners are adapting and producing 17th-century Hispanic texts for modern audiences by highlighting and creating awareness of their own reality, lived experiences, and socio-cultural background as BIPOC artists. Dr. Nieto-Cuebas is also a board member and Vice President-elect for Membership and Registration of the Association for Hispanic Classical Theatre (AHCT).