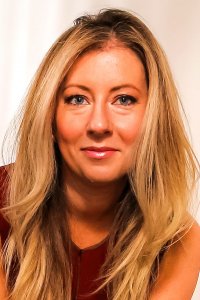 Mary Anne Lewis Cusato earned her doctoral degree from the Yale University Department of French in 2013 and has worked at Ohio Wesleyan University ever since. She was promoted and granted tenure in 2019 and awarded the Sherwood Dodge Shankland Teaching Award in 2020. Dr. Lewis Cusato teaches French language at all levels, as well as courses on multicultural France and the French-speaking world outside of France. She publishes and presents regularly and is currently working on her book project, Multiculturalism à la mode: Americanization, Cultural Minorities, and the Reshaping of Contemporary French Identity (1954-2021).

Dr. Lewis Cusato also regularly guides students to earn prestigious grants and fellowships to fund research and travel related to such topics as the social, economic, and cultural impact of local markets in French life; cultural representations of terrorism in France; immigration in France and throughout the Mediterranean; and cultural identity in the French Caribbean. She has traveled with students to the French-speaking Caribbean islands of Martinique and Guadeloupe; the African Film Festival held in New York City; and to Paris, Marseille, and Lourmarin thanks to Ohio Wesleyan University's "Theory-to-Practice" (TPG) grants. TEW and NEH grants have also facilitated her travel and research in Avignon, Aix-en-Provence, Bordeaux, Casablanca, Marrakech, Agadir, and Essaouira, as well as to the 2014 NEH Institute on Contemporary Cultural Production in Morocco, Algeria, and Tunisia.

In addition, Dr. Lewis Cusato is co-founder and co-director of OWU's Global Studies Institute and the Palmer Global Scholars Program and is highly enthusiastic about efforts to internationalize OWU's curriculum and student experiences.

Finally, Dr. Lewis Cusato is devoted to making higher education as accessible, transparent, efficient, and relevant as possible. She is especially committed to connecting coursework with the workplace and training students and faculty alike to emphasize and articulate transferable skills.

"Experiential Approaches to Teaching African Cultures and the Politics of Representation: Building the ‘Documenting Africa’ Project through StoryMapJS,” co-authored with Professor Nancy Demerdash-Fatemi, The Journal of Interactive Technology and Pedagogy, no. 19 (May 2021).

“Between francophonie and world literature in French: Tahar Ben Jelloun’s evolving authority,” Special issue of The Journal of North African Studies, “Maghrebi Artistic and Literary Expressions in the 21st Century,” 21:2 (2016): 301-309.

"Alien-nation and the Algerian Harraga: The Limits of Nation-Building and Cosmopolitanism as Interpretive Models for the Clandestine Immigrant." Cosmopolitanism, Ltd. Edited by Alexander Stevic and Philip Tsang. Routledge Press (2018)