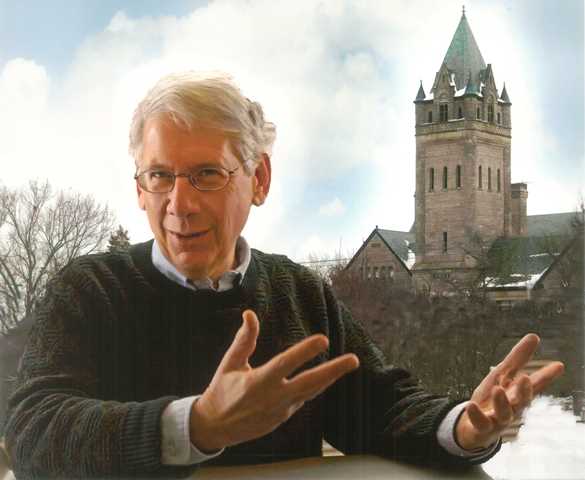 Bob has made a permanent mark as an outstanding teacher, dedicated scholar, inspirational mentor, and wonderful colleague. Bob grew up in Detroit, Michigan, earning a B.A. in Economics from the University of Michigan. He earned his M.A. and Ph.D. in Economics, specializing in Labor and Public Economics from the University of Wisconsin-Madison. Arriving in 1976, he devoted his professional life to Ohio Wesleyan, staying for over 45 years. He remains a lifelong learner and an active Emeritus faculty member on campus.

Bob has always been data-driven. His scholarly work was always contemporary, impactful, and significant. He focused on the labor market of the American Indians, which earned him a publication in the most prestigious journal in Economics, the American Economic Review. Through his spouse, Liz, he became interested in issues related to the mental health of workers and published a series of scholarly papers on the topic. Bob also was interested in immigration issues, focusing on topics such as the economic impact of immigration in the United States, the costs of human trafficking in Europe, the conditions of immigrant workers in Ohio’s rural communities, and the interaction of immigration and inequality.

Bob was always interested in advancing students’ educational and professional development. He mentored countless students in their research projects resulting in publications. He is, what his colleagues would consider, a champion of theory-to-practice at Ohio Wesleyan. Students interested in delving deeper into topics covered in class reached out to Bob for guidance, and he never disappointed. For instance, in the past year, a student approached Bob with an idea to study COVID’s impact on employment issues, and this collaboration resulted in a recent publication of their work.

Given Bob’s scholarly productivity, one might expect that he would have less time to focus on his teaching. However, teaching is where Bob excelled. Whether it was a first-year course such as Principles of Economics, or a more advanced course such as Econometrics, Bob gave his all to his students. He always made time to meet with students, helping them understand the material when they were struggling or leading them ahead when they were curious about topics that extended beyond classroom material. His dedication and genuine concern that they understand the material earned him the Herbert Welch Meritorious Teaching Award in 1999. Bob is not done teaching as he is returning this fall to teach a popular class, Labor Economics.

In addition to Bob’s dedication to teaching and research, Bob is an active member of both the University and Central Ohio communities. Serving as department chair, sitting on university committees, being involved with pedagogical initiatives, Bob’s leadership was always exemplary. Bob’s involvement in the local community includes helping the Strand Theatre analyze how itsservices could be improved, calculating the economic impact of the Delaware County Fair, and working with the Ohio Department of Mental Health and Addiction Services to analyze employment data. His commitment to making the campus and the community a better place earned him a Bishop Francis Emner Kearns Award in 2001, an annual award to a faculty member for leadership on campus and in the community.

Bob’s belief in liberal arts as the tool to live a good life permeates the facets of his life even beyond the walls of Ohio Wesleyan. His three children, Seth, Dan, and Leah, attended liberal arts colleges and have made Bob and Liz very proud parents.

Prof. Gitter enjoys applying economics to a wide variety of issues and values his time with students.