I am currently studying abroad in Seoul, South Korea for the 2017-2018 academic year. With the help of the Jan Baran Fellowship I am able to explore the historic sites of Seoul while studying Korean language at Yonsei University. Studying abroad has allowed me to discover the hidden treasures of Korean culture and society since it is often overshadowed by its neighbors, China and Japan. Although I have a long way to go before becoming fluent in Korean, the Baran Fellowship has allowed me to lay the foundation for years of learning to come. 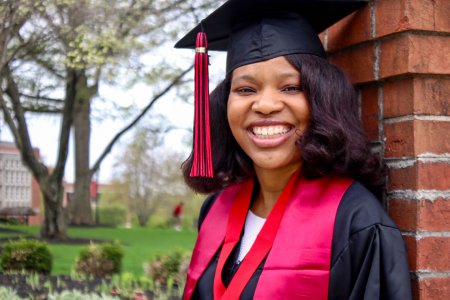 After learning the concept “one people, two nations” to describe the peninsula in high school, I was hooked on Korea. My Google searches about the 38th parallel and life in the Democratic People’s Republic of Korea (DPRK) soon exposed me to the Korean Pop Culture Wave. After high school, I wanted to pursue Film Studies to become a K-drama director. However, through my undergraduate coursework and after meeting a former U.S Diplomat, my current career objective is to work in International Affairs. Korea’s ability to rapidly succeed in political, economic, and social spheres makes it a formidable player in East Asia.

At Ohio Wesleyan University, my majors were East Asian Studies and Political Science. While OWU offers an interdisciplinary degree in East Asian Studies, it does not have Korea-focused courses. With the support of my professors, I curated my own Korean Studies concentration. The positive feedback on my work from my professors encouraged me to keep stepping outside the norm. The biggest challenge was to figure out how to study the Korean language. Thankfully, I received the Benjamin A. Gilman International Scholarship, the Freeman-ASIA Award, and the Jan W. Baran Fellowship to fund my year of study at Yonsei University in Seoul, Korea. I spent my year immersed in the sights, sounds, and culture that had captivated my heart many years earlier.

Since graduating from Ohio Wesleyan University, I have been exploring a variety of job prospects to gain a better understanding of my long-term goals. During this time, I realized that I want to enter government service. Specifically, I want to work for an agency or organization that promotes U.S-Korean relations. I want to work both domestically or in an overseas position. This decision is the result of what I learned both in college, my year living in Korea, and what I have observed since graduation.

I spent my COVID-19 lockdown emailing friends, family, and professors my statement of purpose until it was perfect (or at least good enough to submit). After months of anxiously waiting and a couple hundred email refreshes, I received six different offers to pursue my graduate degree. After careful consideration, I have decided to attend Indiana University Bloomington’s East Asian Studies MA program as a Foreign Language and Area Studies (FLAS) fellow. Before starting classes in the Fall, I will spend my summer participating in an Intensive Korean Language workshop. At Indiana University-Bloomington, I will design my studies around the politics, history, and international relations of Korea. My research interests include Inter-Korean Relations, the Democratization of Korea, the early presidencies (1945-1980) of Korea, authoritarian nostalgia, and racism in Korea. In addition to race politics, I want to explore the impact of Korean cultural identity on the democratic development of Korea and how it correlates with various political movements. Pursuing a master’s degree at Indiana University-Bloomington will prepare me to critically analyze issues related to East Asia and to understand present-day Korea as a player on the world stage. In the future, I will use my acquired knowledge to resolve problems and foster better relationships with the international community, domestically or abroad, through government agencies or organizations related to East Asia.