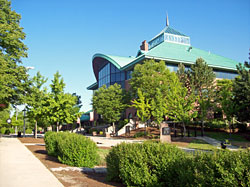 Most of our offices and facilities are located on the third and fourth floors of the campus center, known colloquially as Ham-Wil. It’s the big, green-roofed building in the center of campus; you can’t miss it! 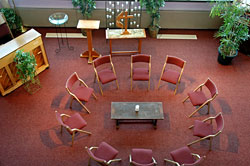 Peale Chapel, located on the third floor of HWCC, is named in honor of Norman Vincent Peale, who declared that it should be “a house of prayer for all peoples” (Isaiah 56:7). In 2006, Cheryl Miller, a senior art student, redecorated the interior of the chapel to explicitly reflect its founding vision as an interfaith sanctuary. Peale Chapel is used for Catholic rosary prayer times, Muslim Jumma prayers, as well as various other religious group meetings. The Chapel is always reserved for prayer unless otherwise scheduled through the Chaplain’s Office. 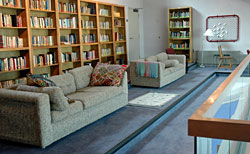 Upper Peale houses the Nina Campbell Contemplative Reading Room, named in honor of the African American woman who was “a second mother” to former university chaplain, Jon Powers. Located on the fourth floor of HWCC, Upper Peale is a quiet place for students to read, study, or catch a nap between classes. 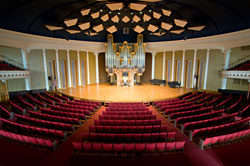 Gray Chapel, located in University Hall, served as the primary chapel for the campus for many years; it was the site of required chapel services for all students. It now houses the Rexford Keller Memorial Organ, the largest of six Klais organs in the country, and serves primarily as a multi-purpose concert hall. Some chaplaincy events, such as the annual Baccalaureate Service, still take place there.