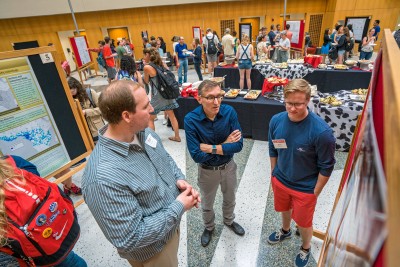 A better understanding of starspots, which are cooler, darker regions on a star’s surface caused by strong magnetic fields, gives a better understanding of how other stars and our Sun create their magnetic fields. Starspots can be detected by changes in the brightness of the star as the spots rotate into and out of our view. We observed a young star called LO Pegasi in order to produce a computer model of the locations of its spots based on its brightness variations.

LO Pegasi is a young K3 main-sequence star that rotates with a period of 10.1538 hours at a distance of 81 light years. Rapid rotation creates strong magnetic fields that suppress convection in the star’s outer layer causing regions to become cooler and thus dimmer than the surrounding surface. These cooler, dimmer regions are known as starspots, and are analogous to the sunspots our own star exhibits. As a starspot rotates into view, the total measured brightness will decrease until the starspot is most directly facing Earth and then increase as the starspot rotates out of view. This periodic dimming and brightening of the star provides information about the starspots on its surface. To measure the brightness of LO Pegasi, the technique of differential aperture photometry was utilized. This technique relies on comparing LO Pegasi to a standard star of constant brightness by using digital images taken with a CCD camera. For our observations we used a Quantum Scientific Instruments 632wsg camera attached to a Meade 14-inch LX600 telescope at Perkins Observatory in Delaware, OH and equipped with standard B, V, R, and I photometric filters. Observations of LO Pegasi began on 2017 June 1 and continued until 20 July. The resulting light curves that were then analyzed via the light curve inversion program created by one of us (Harmon) to produce surface maps. Our observations indicated that LO Pegasi’s light curve changed in both amplitude and shape between 2017 June and July, while its maximum brightness did not change. We present maps corresponding to these two distinct light curves.