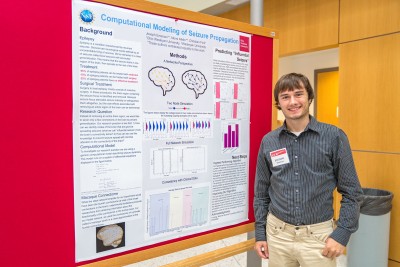 Some patients suffering from epilepsy have to resort to surgery for treatment, in which a part of the brain is removed, sometimes resulting in detrimental side effects. In order to explore the feasibility of less destructive surgical techniques, we constructed a computer model to investigate how seizures that originate in small localized areas in the brain are dependent on the brain’s physical structure for propagation to the rest of the brain. Using simulations produced by this model as a guide, we developed ranking algorithms based only on the connections between brain regions that tell us how proficient each brain region is at propagating the seizure. The development of these algorithms serves as an important step to identifying specific connections that can be severed to completely prevent the propagation of the seizure, while preserving the structure of the brain as much as possible.

Some epilepsy patients with focal onset must undergo resective surgeries, which involve removal of the brain region containing the seizure focus. It may be possible to achieve the same level of treatment by instead severing only a small number of connections from the ictogenic (i.e., seizure-producing) area. To understand how seizure propagation might hinge on the connectivity of the brain, this study attempts to identify the most influential nodes in a brain network, guided only by the network connectivity. Due to experimental limitations, there is no available data on directionality for the human connectome. Since seizure propagation depends on how the nodes are connected and in what direction the connections are oriented, we used the macaque connectome as our network template, which does contain data on directionality. Using a generic computational model describing seizure dynamics, we constructed a model macaque network capable of undergoing simulated seizures. By initiating seizures in a “seed” node, we were able to observe the extent to which the seizure propagated throughout the network. We used the extent of propagation to categorize the nodes as influential or non-influential seizers. This acted as our ground truth to compare against a number of predictive algorithms. Our simulation results showed that the distribution of influential seizers was consistent with real-world clinical data, indicating that ictogenesis may depend largely on network structure. Furthermore, our predictive algorithm demonstrated that the influential seizers could be distinguished fairly accurately using only information provided by the network connectivity. This lays the foundation for future work that will investigate how our algorithm can be used to determine which connections can be severed to prevent seizure propagation.