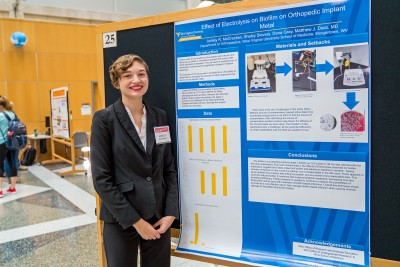 Joint replacement in adults is rising, it is expected to increase by 600% in the coming years, this increase correlates a direct rise in infections. To combat the rise in infections new treatments are up and coming, one of these is the application of an electrical current to the infection.

Implant related infections are one of the most challenging and devastating complications of orthopedic surgery. While these infections are infrequent (0.5-5%) they are especially common in obese populations such as those found in rural Appalachia. Demands for orthopedic procedures, especially in total joint replacement, are projected to increase by 600% over the next 15 years, leading to an increased infection burden.  Increasing the efficacy of current treatments as well as discovering new treatments is key to successfully combat the implant infections that are often resistant to antibiotics. One proposed treatment is electrolysis of metal implants by direct current. The mechanism behind electrolysis is not known but it hypothesized to be caused by the bioelectric effect, creation of radical oxygen species, or by metabolically activating the biofilm. To test the efficacy of electrolysis the following procedure was carried out. A current of 20 milliamps was run through a contained electrolytic cell for 20 minutes, the fluid was then sampled from the well and plated. To further check the efficacy of the treatment the bacteria remaining adherent to the implant material was quantified via ultra-sonication well.  It was found that 20 minutes of exposure to the current rendered the planktonic bacteria nonviable, and reduced the presence of adherent bacteria.