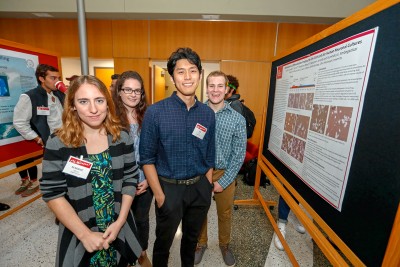 Studying cells in vitro (in a dish) allows us to observe cell growth, cell-to-cell interactions, and test the effects of various chemicals on these cells more easily than could be done in a whole organism (in vivo). Studying neurons in vitro would make it easier to study neuronal development and diseases like Alzheimer disease, but neurons are difficult to grow and keep alive. As an alternative, some tumor cells are easier to maintain in vitro, and under certain conditions, can be differentiated, or changed, into neuron-like cells which look and function much like neurons. This summer, the Ambegaokar lab has experimented with which conditions best grow neuron-like cells from these tumor cells.

Like all cells, neurons are derived from “stem cells” or “precursor cells,” but the factors that induce neuronal differentiation are still largely unknown, and growing and maintaining neurons in vitro is difficult. SH-SY5Y cells are human brain-tumor derived but behave like “neuronal progenitor cells,” which grow and divide under normal conditions , but have potential to differentiate into neuron-like cells, having axons, similar morphology to neurons, and the ability to carry electric potentials cell to cell. However, several different protocols on differentiation have been published, each with varying levels of success. Our goal was to systematically test the various components from published protocols and derive a treatment protocol that resulted in robust differentiation as efficiently as possible. In previous studies, retinoic acid (RA) has been shown to trigger the inception of “neurogenesis” in SH-SY5Y cells, while other supplements are then later added to maintain neuronal growth, including potassium chloride, vitamin B-12, brain-derived neurotrophic factor (BDNF), Ara-C, db-cAMP, and the proprietary supplement, B-27. Our results show that a three-day treatment with RA and BDNF followed by a 7-day treatment with potassium chloride, B-27, and db-cAMP were the parameters that yielded the most neuron-like cells, as observed through light microscopy. Future directions include confirming the expression of neuronal genes via quantitative PCR (qPCR) and immuno-fluorescence microscopy. With an optimized differentiation protocol, we will be able to use SH-SY5Y cells to study human neuronal development and neurodegenerative disorders such as Alzheimer disease.