Lifetime Measurements in 73As 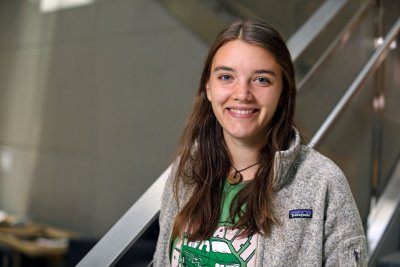 Only two nuclei in the mass A = 70 region (67Cu and 71As) are known to exhibit large deformation as a result of a proton occupying the f7/2 orbital. So far, the experimental signature of such an occupation has not been found in 73As. Thus the goal of this work was to infer the underlying deformation of 73As by measuring as many lifetimes as possible in an attempt to understand the lack of such a structure in this nucleus. 73As nuclei were produced at high spin using the 14C(62Ni, p2n) reaction performed at Florida State University with a beam energy of 50 MeV. A Compton-suppressed Ge detector array consisting of three Clover detectors and seven single-crystal detectors was used to record γ rays in coincidence. Lifetimes of 14 excited states were measured using the Doppler-shift attenuation method, which compares the slowing-down time of 73As nuclei in the target with the decay time of each state of interest. Whenever possible, mean lifetimes were measured by gating from above the transition of interest to eliminate the dependence on unknown side feeding. Quadrupole deformation parameters β2 were inferred from the lifetimes assuming axially-symmetric shapes and compared directly with those from total Routhian surface (TRS) calculations. The trend of the experimental β2 values with spin showed better agreement with the predicted ones for the positive-parity states than the negative-parity states.

It is common for atomic nuclei to possess deformed (non-spherical) shapes. Sometimes the deformation leads to a unique signature of radioactive decays, acting somewhat like a “fingerprint” of the underlying structure. In the arsenic (As) isotopes (having 33 protons), strong deformation in As-71 (having 38 neutrons) results in an unusual sequence of decays that has not been observed in As-73 (having 40 neutrons). This work attempted to understand why the unusual decay pattern exists in As-71 but not in As-73.