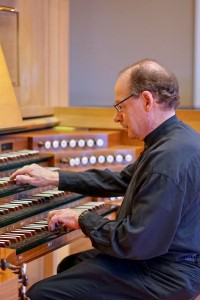 James D. Hildreth received a Bachelor of Music in Organ Performance from the College-Conservatory of Music at the University of Cincinnati and a Master of Sacred Music with an emphasis in Choral Conducting from the Southern Methodist University in Dallas, Texas. Since 1987 Mr. Hildreth has been Organist of the Broad Street Presbyterian Church in Columbus, Ohio. He is active in the American Guild of Organists. In addition to having served in several capacities in the local Columbus Chapter, he writes reviews of CDs and DVDs for the official journal of the AGO, The American Organist. He has served as Organist for the Columbus Symphony Orchestra since 1988 and has performed as organist and harpsichordist with the Pro Musica Chamber Orchestra of Columbus. He is Organist for the annual Gamanfa Ganu of the Welsh Society of Central Ohio. He teaches organ privately and at Ohio Wesleyan University. He has given organ recitals in the eastern United States, including Chicago’s Fourth Presbyterian Church, Houghton College in New York State, New York City’s Saint Thomas Church Fifth Avenue, the historic Methuen Memorial Music Hall in Massachusetts, and at the 2003 national convention of the Organ Historical Society in South Central Pennsylvania. In November 2004 he was the first American to perform at the Organ Hall in Dnepropetrovsk, Ukraine. Jim and his wife, flutist Valorie Adams-Hildreth, perform together as Duo Celeste.