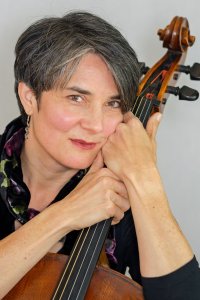 Dr. Mary Davis, hailed as “an unusually fine cellist,” currently performs with the Columbus Symphony Orchestra and UCelli: The Columbus Cello Quartet. Her interests and activities have ranged from baroque performance—as principal cellist and soloist with the Columbus Bach Ensemble—to contemporary music, including premieres of many works and dedications of new pieces. Mary was featured as soloist in the Dayton Philharmonic’s recording of William Bolcom’s “Daedalus” from Inventing Flight, and her playing and arrangements can be heard on Lyrica’s disc, A Crystal Spring. She holds degrees from the Peabody Conservatory, the College-Conservatory of the University of Cincinnati, and The Ohio State University and has taught cello at Wright State University, Cedarville University, OSU, and currently at Ohio Wesleyan University. Mary teaches cello privately in Clintonville; two of her students have served as All-State principal cello in recent years, and some of her earliest Columbus students now have their own thriving studios.