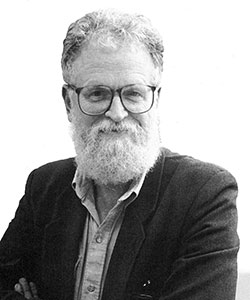 Conrad A. Kent was born in Des Moines, Iowa, in 1942, into a family of pioneer preachers and teachers and traveling railroaders. He graduated from Roosevelt High School, where he lettered in track and cross country and was an Eagle Scout and Silver Explorer. At 17, he began his own life of travel by taking a ship to England and bicycling from Amsterdam to Rome. A year later, he had already walked, bicycled and hitchhiked through 27 countries.

In 1968, he began to teach full-time at Harvard as an instructor, before leaving to teach at Amherst College. During his seven years as Assistant Professor of Spanish at Amherst, he was awarded the Faculty/Trustee Fellowship for the academic year 1972-1973, made an Honorary Member of the Amherst Class of 1975 and gave the Senior Assembly Address in Johnson Chapel during Commencement Exercises.

From 1976 to the present, Conrad has been on the faculty of Ohio Wesleyan University. In 1983-1984, he received a full-year fellowship from the National Endowment for the Humanities and was invited to Columbia University as a Visiting Scholar to study the ultraconservative roots of the architecture of Antoni Gaudi. Lecturing at Smithsonian Institution programs in New York and Washington, Conrad developed theories that were delineated in articles on the cultural history of Barcelona. With Dennis Prindle he published a book in 1992 on Gaudi’s Park Guell: Hacia la arquitectura de un paraiso: Park Guell. The following year, an English version was published by the Princeton Architectural Press.

Although Conrad continued to pursue Gaudi studies, his appointment in 1986 as co-director of the Ohio Wesleyan’s Spanish study abroad program in Segovia reawakened his love for Castile. In 1988, he moved the Ohio Wesleyan program in Salamanca. During his eleven years as director of the program, he created field trips along the pilgrimage road to Santiago de Compostela. Having made the pilgrimage by foot with his wife on two occasions (1972 and 1989), and having lived in the Pyrenees villages along the ancient pilgrimage road, Conrad was able to make that experience come alive for hundreds of students.

As director of the Salamanca program, Conrad also organized conferences and published three collections of essays from those conferences. In 1998, the city of Salamanca published his book on the Plaza Mayor of Salamanca under the auspices of the European Union’s Raphael Program. As part of Salamanca’s bid to become the Cultural Capital of Europe in 2002, the city sent the book to every mayor of Europe.

In 2001, he published a book and organized an exhibition of the life and work of the Salmantine modernist, Luis Gonzalez de la Huebra. In 2005, his book on the Salamanca skyline, El perfil de Salamanca: historia fotografica de una sena de identidad, also inspired an exhibition in the city’s cultural center: La Sala de Santo Domingo. The same year, he edited the third volume of a complete history of the Plaza Mayor and contributed numerous articles and book chapters to the 250th anniversary of the site. As a tribute to his contributions to the city of Salamanca, the mayor honored Conrad as Adopted Son (“Hijo Adoptivo”) of Salamanca.

In 2007, his discovery of images of Castilla y Leon in the Barcelona photographic collection of the Institut Amatller led to a book and an exhibition that was first displayed in Salamanca and then traveled to Leon, Palencia, Avila and Barcelona. He is now at work on the photographic archives of the Hispanic Society of America. In December of 2008, Conrad’s book on the print images of Salamanca, Estampas de la ciudad de Salamanca, was published as the first of a trilogy of studies on the graphic images of the city and the province. The second volume, pertaining to the images of Wellington’s decisive defeat of Napoleon’s army in Salamanca on July 22, 1812, will appear later this year.

Teaching remained Conrad’s passion. He was recognized for his commitment to students and skill in teaching when he received the 1993 Bishop Herbert Welch Meritorious Teaching Award from Ohio Wesleyan. Indeed, as a Spanish professor, Conrad has brought into relation his life experiences in Spain and Latin America and close readings of Spanish literary texts, from medieval ballads and Don Quixote to contemporary novels, short stories and poetry. He is also known to Ohio Wesleyan students as an engaging and thought-provoking professor of courses in the Department of Humanities/Classics. His Modern Temper course and his Rites of Passage became rites of passage for generations of students. In the words of a Transcript columnist urging fellow students to sign up for his courses, “Professor Kent’s classes are truly life-changing experiences.”

Conrad Kent’s scholarly work will continue; his legacy at Ohio Wesleyan will linger. We wish him well.