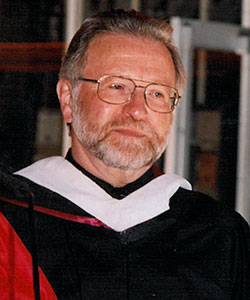 I am delighted to announce that the winner of the Welch Award for the Year 2001 is professor of English, Mr. Robert J. Flanagan.

He has been our creative writing instructor for thirty-two years, teaching both introductory and advanced creative writing and workshops on poetry, fiction, playwriting and screenwriting, as well as literature courses on the novel, drama, short story, poetry, tragedy, the structure of narrative, the plays of Sean O’Casey, the American western novel, contemporary American fiction, and one of his specialties and favorites, the literature of boxing.

Professor Flanagan has been an extraordinarily productive and successful writer over the last three decades. He has contributed more than fifty pieces to fiction and non-fiction anthologies, fiction periodicals, poetry anthologies and poetry chapbooks and periodicals and given scores of readings and other presentations. His novel, Maggot, first published in 1971, has been through twelve printings and sold over a quarter million copies. He has also produced three books of short stories: Three Times Three in 1977, Naked to Naked Goes in 1986, and Loving Power in 1990, as well as two books of poetry: The Full Round and Once You Learn You Never Forget; and two stage plays: Jupus Redeye and Volleyes; and one screenplay, Teller’s Ticket. He has also received grants and fellowships from The Ohio Arts Council, The National Endowment for the Arts, and The National Endowment for the Humanities.

Professor Flanagan is, according to his students, and in their words: “energetic,” “enthusiastic,” “encouraging,” “inspiring,” “generous,” “supportive,” “witty,” “funny,” and “extremely honest when dealing with a student’s work.” Said one student: “He made me think deeply about literature and I learned a lot.” Said another: “Professor Flanagan has changed my attitude toward literature, both as a writer and as a reader;” and another: “He’s extremely encouraging and takes interest in what his students do both in and out of class; I’m a better writer because of it.” Somewhat more specifically, another student said: “He gives you a real insider’s view into the publishing business;” another observed that “he’s known to be challenging, demanding and difficult, but that comes from his honesty and his passion for the art of writing; to me that is not difficult at all;” and one student commented more light-heartedly: “Flanagan has never failed me; he always leaves me with hilarious anecdotes to tell my roommates after class.” In more abbreviated form, three other students sum it up: “Flanagan rocks my world!” “He’s an amazing guy;” and last but maybe most descriptively, “Flanagan Rules!”