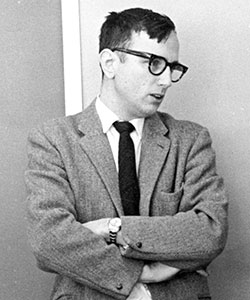 Wendell Keeler Patton was born in upstate New York near the rolling hills of James Fenimore Cooper and Washington Irving. There he grew up and progressed in the usual way through a boyhood of glass jars filled with fireflies, birdwatching, and pockets of biological specimens. In due course, he graduated from high school and enrolled at Hamilton College in nearby Clinton, New York, where he majored in Chemistry and English. In the summer between his junior and senior years, he was awarded a fellowship to study marine invertebrates at the Marine Biological Laboratory in Woods Hole, Cape Cod, Massachusetts. There, Wendell discovered his passion, and the rest, as the saying goes, is history.

After receiving his A.B. from Hamilton College, Wendell spent the next two summers as a fisheries aide for the U. S. Fish and Wildlife Service. Wendell learned to identify the many species of marine invertebrates found in the stomachs of haddock and halibut and began to wonder about their biology. During these years Wendell earned his Master’s Degree in invertebrate zoology at The Ohio State University, but the biology of marine invertebrates, particularly the interactions among species, dominated his thoughts. He was awarded a Fulbright Scholarship to Australia where he enrolled at the University of Queensland in Brisbane. His thoughts on species interactions prompted him to focus on the evolutionary adaptations of the small animals that live in close association with the corals that comprise the Great Barrier Reef of Australia. He studied not only these associates, but also how they affected and were affected by the corals, the process of coevolution. Wendell is among the pioneers in this area of evolutionary biology. His research site on Heron Island, Australia, became an integral part of Wendell’s being, a touchstone to which he and his students have returned for over forty years as part of a productive research program in marine biology.

After he received his doctorate from the University of Queensland, Wendell returned to the United States where he taught at Duke University and continued his studies in marine biology at the Duke Marine Laboratory. In 1962 he accepted a permanent position at Ohio Wesleyan University where he attained the rank of Professor in 1971. General zoology is Wendell’s course. Generations of students have delighted in the inexhaustible supply of stories about animals that pepper Wendell’s lectures. His experiences with ecosystems throughout the world bring life to every topic and every organism he discusses. In addition to the introductory course, which he has taught every year for almost forty years, Wendell has taught courses on parasites and immunity, invertebrate zoology, marine biology, island biology, and more recently biology and tropical nations. For each, his enthusiasm must be seen to be believed, but it is that enthusiasm that students remember and for which he received the Bishop Herbert Welch Meritorious Teaching Award in 1986.

In addition to many publications on the biology of small crustaceans inhabiting marine invertebrates, Wendell has taught courses on the biology of coral reefs at the West Indies Laboratory, St. Croix, U.S. Virgin Islands, and at the University of Queensland. He has also visited numerous marine biological stations in the eastern and western hemispheres.

Wendell is married to Rayna Scott Patton, a native of Australia. They have three children: Alison, a physician; David, a professor of political science at Connecticut College; and Roger, an employee of Wal-Mart Corporation.