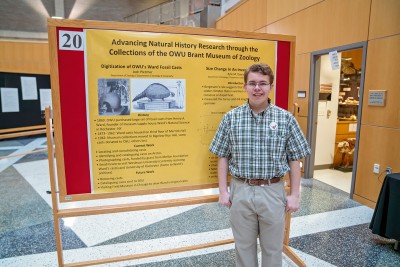 Kyle Davis’ research focuses on Bergmann’s Rule, which states that as temperature decreases, body size increases, decreasing surface area and minimizing heat loss. House sparrows (Passer domesticus) are an ideal study species as they are prevalent across North America and in museum collections. Birds in colder latitudes were expected to be larger than those in warmer latitudes. Tarsometatarsus, wing chord, and beak dimensions were measured on specimens from OWU and eight other institutions. Although sparrows were slightly larger in colder latitudes, these results were not significant (ANOVA, P > 0.05). This suggests that evolutionary pressure to increase size was not strong enough to produce noticeable effects.

Josh Pletcher’s research involves OWU’s collection of fossil casts from Ward’s Natural Science, originally established as a museum supply house. After their 1869 purchase, the casts were gradually overlooked and forgotten. Initial work focused on locating and identifying casts. We visited Wesleyan University to discuss cast restoration techniques, followed by the University of Rochester, which holds Ward’s papers. In 2018, the Brant Museum of Zoology was awarded a grant by the Mellon Foundation to digitize and photograph the Ward’s casts; current efforts are directed at photography and migrating data to Arctos. Future steps include investigating casts OWU donated to The Ohio State University, and restoring our casts to their original state.