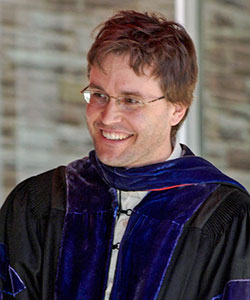 I am pleased to announce that the winner of the Sherwood Dodge Shankland Award for the Year 2011 is associate professor of philosophy Erin Flynn.

Erin received a B.A. in philosophy from the University of Colorado at Boulder and his Ph.D. from Sony Brook University. His area of specialty is 19th century philosophy. Erin teaches Introduction to Philosophy, Critical Thinking, Philosophy of Science, Philosophy of Law, and International Business Ethics among others. Erin has authored several articles on Hegal’s philosophy of right and justification for punishment and has been working on a historical novel about what shapes human consciousness.

Erin is engaged with students both within and outside the classroom in a number of different ways including playing music, basketball, or starring in a two-man, one-act play directed by a student for his senior project.

Erin’s students describe him as, and I quote, “an incredible teacher—one who is extremely engaging and effective.” He is “awesome, passionate, and energetic about his work.” Still another student writes, “He is smart and downright hilarious…there is never a dull moment with Flynn.” And finally this student admits: “Dr. Flynn is hipper and cooler than the college students.”