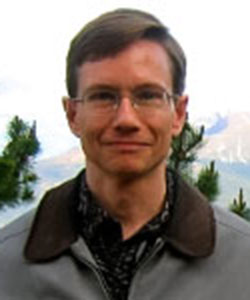 I am most pleased to announce that the winner of the Sherwood Dodge Shankland Award for the Year 2005 is associate professor of physics and astronomy, Dr. Robert Harmon.

He has contributed many papers at meetings of the American Astronomical Society and published a number of articles in professional journals, including a piece in the Astronomical Journal on “Imagining Stellar Surfaces via Matrix Light Curve Inversion.” And, he has worked  with advanced students to produce work of publishable quality that he and the students have presented at various professional meetings.

Dr. Harmon is, according to his students and, again, in their words: “intelligent,” “thorough,” “demanding,” “helpful,” “fair,” “enjoyable,” “enthusiastic,” “likable,” “interesting,” “animated,” “humorous,” “entertaining,” “delightful,” and “awesome.” As one student put it: “Professor Harmon is so enthusiastic about Astronomy and feels that no sacrifice is too great in the name of science.” Said another: “He always makes you think about the world around you.” And another: “Harmon is a wonderful teacher because he will do anything (even make himself look weird) to help his students understand; he’s always smiling and makes class a lot of fun.” From many student comments, it is clear that Professor Harmon has a great sense of humor; they regularly say things like: “Harmon is funny,” “Harmon is a funny prof.,” “Dr. Harmon has a charming sense of humor,” “Dr. Harmon is a comical guy.” They also say: “He knows his astronomy and has a passion for teaching it.” Two comments in particular stand out: one is: “give me astronomy or give me death;” the other is: “stars are hot but astronomy is cool.”