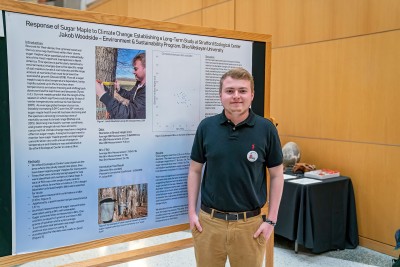 The sugar maple is one of the most important species of tree in North America for its hard wood and for its sap, which is often tapped and made into maple syrup. The concentration of sugar within its sap becomes increasingly important as demand for the tree increases and production and growth follow suit. Sap only flows after the first thaw of the season, and thus an increase in global temperature could have drastic effects not only on the time at which the sap is harvested, but the overall amount of sap collected as a whole. Thus, an experiment was started at Stratford Ecological Center to determine how sugar maple individuals would change as the climate changed around them. Variables being measured include sugar concentration with a refractometer, and tree growth over time with dendrometers placed around the trees that are being studied. Information will be presented in a poster style format that will allow clear explanation of the results of this study.