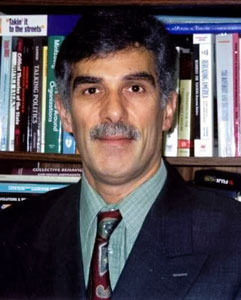 I am delighted to announce that the winner of the Welch Award for the Year 2008 is professor of sociology and anthropology, Akbar Mahdi.

Akbar received his B.A. in Sociology from the National University of Iran, and his M.A. and Ph.D. from Michigan State University.

His teaching career began at Adrian College in Michigan. Dr. Mahdi taught briefly at Central State University in Ohio before joining the Ohio Wesleyan faculty in 1993. Teaching awards are nothing new to Akbar, having received recognition for teaching excellence at Michigan State and Adrian before coming to Ohio Wesleyan. He is also the recipient of the Outstanding Teacher Award from the Michigan Sociological Association.

Dr. Mahdi research interests have been in social structure in the Middle East - the role that women, political fractionalism, social classes, and globalization has had on Iranian society. His current research is focused on the concept of civil society in Iran and the attitudes of Iranian youth and women immigrants in the United States. He has conducted a national survey of the latter two groups in the United States and is studying patterns of social adjustment, cultural change, and national identity.

He is widely published including several books, authored numerous research and review articles on topics ranging from the sociology of knowledge to the political economy of Iran and Islam.

In the words of his students, Akbar is and I quote “one of the best professors I have ever had the privilege of studying under. I’ve never learned so much in a single semester. He pushes us to be better!”

Another student describes Akbar as being very passionate about what he teaches. “He is full of enthusiasm and knowledge, encouraging us to ask lots of questions to ensure a full understanding of the topic.”

Another student reports that he is “very funny and interesting continuing to say I love his applicable news tidbits.”

And finally what more can be said other than this statement from a student “Dr. Mahdi knows everything. He is an amazing teacher. Akbar you’re a crazy dude!”