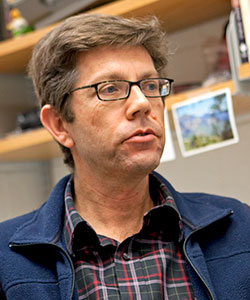 I am most pleased to announce that the winner of the Sherwood Dodge Shankland Award for the Year 2000 is professor of botany-microbiology, Dr. David Johnson.

Dr. Johnson received his bachelor’s degree from Hendrix College and his master’s and the Ph.D. from the University of Michigan. He came to Ohio Wesleyan in 1989 as an assistant professor, was granted tenure and promoted to associate professor in 1994, and was promoted to full professor in 1999.

Dr. Johnson’s scholarly interests are mainly in taxonomy, and he has done field work in many exotic places including Tanzania, Cuba, Brazil, Ecuador, Guatemala, Trinidad, Panama, Costa Rica, Argentina, Paraguay, Peru, and Venezuela. He has won nearly a dozen research grants, including the prestigious Fulbright Fellowship in 1995. The results of his research have appeared in numerous scholarly scientific journals.

In addition to his popular courses on the lower level, such as Practical Botany and Environmental Plant Biology, and his highly-respected Freshman Honors Tutorial titled, “The One True Tree of Life,” Dr. Johnson usually teaches upper-level courses on the Biodiversity of Flowering Plants, and the Adaptive Biology of Plants.

Dr. Johnson is, according to his students, and, again, in their words: “highly organized,” “detailed,” extremely knowledgeable,” “challenging,” “demanding,” “confident,” “approachable,” “helpful,” “supportive,” “positive,” “encouraging,” and “fascinating.”One student observed that David “never hesitates to spend extra time with students to help them understand a concept; even when students get obnoxious, he never loses his temper or his willingness to help them learn.” Said others: “He covers a lot of material but at just the right pace;” “he makes science fun and useful;” “he creates a family atmosphere in class; we appreciate the hands-on experiences he provides and his out-of-class assistance.” One student concluded: “Dr. Johnson pushes his students to their potential yet presents material in such a fascinating manner that the student’s academic background and potential do not matter nearly so much in the end as does the effort that students put forth; he is so excited about the material himself that it is impossible not to be interested in whatever he’s talking about.”

Finally, one student, as if to bring the semester to an end, concluded, tongue-in-cheek: “It all comes down to photosynthesis.”