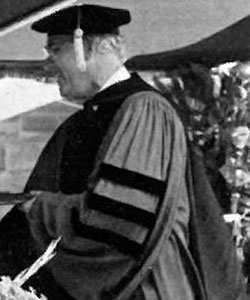 Born in New York City, Jan attended Trinity School in New York, and received his B.A. in history from Kenyon College. A Master of Arts and the Doctor of Philosophy degrees, with concentration in the early Middle Ages, were awarded by New York University.

Before coming to Ohio Wesleyan, Jan taught in various capacities at Queens College, New York University, and Indiana University’s Regional Campus at Fort Wayne. Such was his enthusiasm in 1969 about his new position in Ohio Wesleyan’s History Department that he and his wife Carol learned both verses of the Ohio Wesleyan Alma Mater before their move to Delaware. He was promoted to Associate Professor in 1972; to Full Professor in 1977; and in 1984 was appointed to the Aden S. and Mollie Wollam Benedict Chair of History at OWU. He served as Chair of the History Department for a total of 11years between 1974 and 1991. For three semesters (in 1987, 1990 and 1997) he was Visiting Professor of History at the Florence (Italy) Center of Syracuse University.

In the History Department at OWU Jan has taught a large scope of courses in European history - from the ancient world to the Reformation era. In addition to his popular introductory courses on early European history, he offered upper-level courses on the history of ancient Greece and Rome, the early and high Middle Ages, the European Renaissance, and post-Renaissance/Reformation Europe. He also offered special topic courses and Honors Tutorials, including courses on the Black Death and on medieval outcasts. Among his favorite offerings was a team-taught course comparing medieval Paris with Renaissance Florence which evolved into another team-taught course devoted exclusively to Florentine culture from the 14th to the 16th centuries.

Both his students and colleagues recognized Jan’s extraordinary devotion to teaching and the considerable energy he expended in adapting his skills to the changing needs of his students. The Ohio Wesleyan community has recognized his consistent excellence by awarding him both of its teaching awards the Sherwood Dodge Shankland Award for the Encouragement of Teachers in 1975, and the President Herbert Welch Award for Meritorious Teaching in 1984. These distinctions were followed in 1987 by his election to Phi Beta Kappa and in 1996 by his induction into the history honorary, Phi Alpha Theta.

Jan’s love of teaching extended beyond the Ohio Wesleyan community. In 1990, 1992 and 1994 grant requests to the National Endowment for the Humanities for which he was co-author were funded for the purpose of summer study by 35 secondary school teachers on the topic of Florentine Renaissance Humanism. Jan taught in all three of these summer institutes, earning the same superlative evaluations from secondary school teachers that he had merited from OWU students. Teacher-participants in these summer programs are still recommending OWU to their better students, largely because of Jan’s example of what a teacher­scholar can be.

Jan was creatively involved in two major programs which remain part of OWU’s current identity: the National Colloquium and the Honors Program. Under the direction of former president David Warren, Jan helped to design the NC program, and served as co-Director for its first two years in 1985-86. His insistence on academic excellence involved him in crafting the current Honors Program, and in helping President Warren secure broad support for it from the Board of Trustees. From 1984 to 1987 he co-directed the program, designing recruitment strategies and developing selection criteria for prospective Honors students. In addition to campus service in these capacities, Jan has served on numerous faculty committees over the past 30 years, fulfilling what he considered a sacred duty - participation in the college’s governance system.

As a scholar, Jan has distinguished himself with the publication of two books on eighth-century medieval history, as well as several dozen articles and reviews. His professional development also included membership in several associations, as well as participation in various conferences on European history, as organizer, session chair, and presenter. His scholarship interests resulted in extensive European travel, particularly in Italy, where he has avidly visited the sites, both famous and obscure, whose names surfaced so regularly in his courses. Florence remains his favorite city largely because of its immensely rich history and the treasures of its art. Deeply moved by the beauty of its buildings, sculpture and paintings, Jan generated an enthusiasm for Florence which many of his students found contagious.

In the Delaware community, Jan and Carol have raised two sons. Jan has been an active member of St. Peter’s Episcopal Church, serving as Vestry member and Senior Warden. His abiding faith is seen also in his steadfast support of the Cleveland Indians since long before their current success, and in his devotion to the family dog, Bunter, whose twice-a-day walks are a neighborhood tradition.