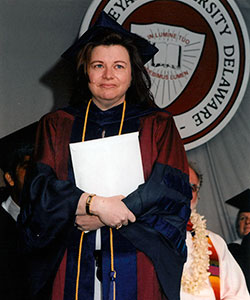 Kim Dolgin was born in Miami Beach, Florida and spent her early childhood in Tampa. She moved to New York City after her father’s death and graduated from high school there. She entered the University of Pennsylvania at the age of 16 and earned a B.A. in three majors Biology, Anthropology, and Paleontology.  Even at an early stage in her career, Kim demonstrated competence in a wide range of fields. Her biology master’s thesis at Penn—Kim began her career as an evolutionary biologist—was an ethological study of chimpanzee play behavior, a topic that naturally led to an interest in child development. She received her Ph.D. in developmental psychology at Penn under the supervision of one of psychology’s premier researchers, David Premack. In 1981, Kim became an assistant professor at the University of Minnesota’s Institute of Child Development. While in Minnesota she met her husband, Ed Adelson, and realized that she loved teaching more than the institute’s administrators wanted her to. When Ed was hired by The Ohio State University’s music department to teach viola, Kim came to Columbus and joined the Psychology Department here in 1985. At Ohio Wesleyan, she found the right person-job fit: a place where teaching, scholarship, and citizenship are all valued. Kim and Ed are the parents of Jaimie, a doctoral student in neuroscience at Stanford University, and Charlie, a soon-to-be graduate of Grinnell College.

For all of her 25 years at Ohio Wesleyan, Kim was the only developmental psychologist on the staff. She taught Child Psychology, Adolescent Psychology, and Lifespan Development. She developed new courses as well. To support the Women’s Studies program, she taught the Psychology of Women. Linking biological and psychological issues, she taught a course on Human Sexuality. She developed a course on children with special needs she titled the Psychology of Physically and Behaviorally Impaired Children. Later in her career, she became interested in the impact of communication technology on children and adolescents and taught a seminar on the topic. Her courses were renowned for being both challenging and engaging. Kim encouraged outside-the-classroom experiences. As an example, students taking the Adolescent Psychology course had the assignment of observing the dress and behavior of teens in a mall. Kim also taught Introduction to Psychology throughout her career. Her enthusiasm for the science of behavior attracted many students to the major. The University recognized Kim’s exceptional teaching ability by awarding her the Shankland Award for the Encouragement of Teaching in her fourth year at OWU and the Bishop Herbert Welch Award in her twenty-first year. Very few faculty members at Ohio Wesleyan have earned both awards.

Kim was a productive and innovative scholar during her time at Ohio Wesleyan. She published 30 articles and book chapters on subjects ranging from the child’s ability to detect emotion in music to the way adolescents and parents disclose information to each other. A generalist in a time when most developmental psychologists specialized, Kim was open to an amazing array of research topics that students brought to her for supervision. She coauthored papers with students on how children appreciate whether a mistake is an accident or intentional, the best ways to teach children to cross the street, gender differences in how siblings talk to each other, and many other areas. Over the years, Kim put her passionate interests in adolescence and teaching into her work on a textbook. In 1996 she took over authorship of The Adolescent: Development, Relationships, and Culture. Now in its 13th edition, it is one of the best-selling texts on the subject. Kim’s scholarship is widely acknowledged. At one time or another, she has been a reviewer for more than 10 research journals and three publishing houses.

As much as Kim contributed to the Psychology Department, one could say that she contributed just as much to the University as a whole. Ina University where faculty governance is taken seriously, Kim was a model citizen. She was almost automatically elected to every committee for which she stood for election and then became the chair of that committee. During her career here, she chaired the Committee on Admission and Financial Aid, the Academic Policy Committee, and the University Governance Committee. She also served on the Faculty Personnel Committee, the Reappointment Appeals Committee, several presidential search committees, and numerous ad hoc committees. In all of these efforts, Kim was a worker bee, a diplomat, an able communicator, and an innovator.

Kim’s enjoyments come from sources well outside of academic circles. Her office door was taped over with her collection of tacky postcards from resorts, a collection to which her students were encouraged to contribute. She reads voraciously in science fiction and plays online games, but doesn’t want anyone to know (sorry, Kim, about making this so public today).  To say that Kim is an avid naturalist is an understatement.  She and Ed have spent weeks bird-watching around the U.S. during summers. Their hiking adventures have taken them around the world. In fact, Kim is not here today because she and Ed moved to Christchurch, New Zealand, where Ed is the Pro-Vice-Chancellor for the Arts College at the University of Canterbury and Kim is teaching part-time in the Human Development department. While these are the ways they make a living, perhaps a second reason for their emigration was to live in the unbelievable beauty of New Zealand’s South Island. She tells us that she misses OWU dearly, but is thriving on a diet of teaching, birding, and New Zealand rugby.