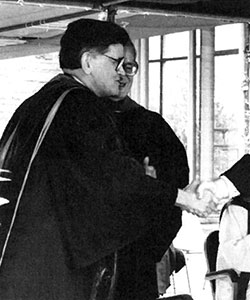 A true son of Ohio, Leathers was born in Toledo, raised on a farm near Cygnet, and educated in the North Baltimore public schools. But when it came time for advanced study he migrated to the citadels of eastern academia, first to Cornell, where he received the B.A. in American Studies in 1952, then to the University of Pennsylvania for a master’s in American Civilization in 1954, and after two years of further graduate work at Harvard and two more teaching at Northeastern University, back to Pennsylvania to complete the doctorate.

For his dissertation, Professor Leathers returned to his roots in a way, writing on the Ohio poet Ridgely Torrence. In 1961 he returned to Ohio, joining the Ohio Wesleyan faculty as a Visiting Instructor. To the institution’s great good fortune, the tenuous adjective “visiting” soon disappeared from his title. With his dissertation in hand and the Ph.D. in American Civilization conferred in 1963, he was granted tenure the next year, thereafter progressing steadily through the ranks to become a full professor in 1971.

In his 33 years here, Professor Leathers has taught a wide range of courses in both the English and Humanities-Classics Departments. His offerings in English have included composition at several levels, numerous American and British literature courses—especially the major surveys of the 19th century American Literature—and seminars in 20th century American poetry. Wearing his Humanities-Classics hat, he has covered the spectrum from “Smiles and Laughter” through “The Devil, The Hero and God” to “The Tragic Vision.”

By no means has Dr. Leathers’ service to Ohio Wesleyan been confined to the classroom. He has labored faithfully on some of the most demanding faculty committees, and had been a continuous member of the Women’s Studies Committee since 1981. His diligent, thoughtful attention to book purchasing has been instrumental in maintaining and strengthening Beeghly Library’s collections in his several fields of interest. Unbeknownst to all but a few, he has for years privately supplemented the English Department’s book budget with a generous annual gift.

Professor Leathers was appointed Rebecca Brown Professor in 1984 and has held the Benjamin T. Spencer Professorship for the past two years. In 1987, he spent a semester as Research Fellow at the Newberry Library in Chicago. Perhaps most remarkable of his official honors is his place among the truly select group of faculty who have won both the Shankland Award for the Encouragement of Teachers and the Welch Award for Meritorious Teaching.

Recently, in the second of his public lectures as the Spencer Professor, Dr. Leathers delighted a large audience with his reflections on the meaning and value of the arts and literature to which he has been dedicated since he began listening to opera broadcasts as a lad back on the farm in Cygnet. Now that his distinguished teaching career has come to its end, we’ll no longer hear him whistling or singing favorite arias in the echoing passages and stairwells of Sturges Hall. However, we may be sure that this commitment to the life of the creative imagination in all its manifestations—a commitment that has touched and inspired two generations of our students—is not ceasing, but simply flowing into a different channel.