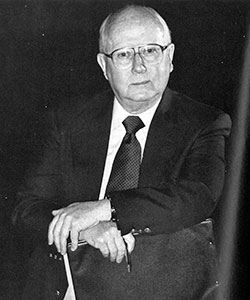 At about this same time 44 years ago, Robert R. Crosby walked the stage of Gray Chapel to receive his diploma and become a proud alumnus of Ohio Wesleyan University. Then, after 19 years of honing his teaching skills at high schools in Ohio and Kentucky and at the University of Indiana, Bob returned to his alma mater as a member of the faculty.

A teacher of Speech and Theatre, Bob chaired the department during the construction of Chappelear Drama Center and the establishment of theatre as a separate department. His service to his academic discipline has included the presidencies of one state and one national theatre organization.

Bob’s special interest areas are Theatre History and Creative Dramatics and Children’s Theatre. Two research grants for travel to England provided him a special insight into Creative Dramatics which he passed along to Ohio Wesleyan students through his ever popular courses.

Play directing has always been a special interest and one of Bob’s major contributions to the University. With a special sensitivity to language, he has directed 15 different Shakespeare plays, some more than once. During his entire career, Bob has directed more than 100 plays.

During his 25 years of teaching at Ohio Wesleyan, Bob’ s hallmark has been enthusiasm, dedication, and high standards. As many of you in the audience know, his effectiveness as a teacher was acknowledged by his peers who chose him for the Bishop Herbert Welch Meritorious Teaching Award in 1982.Over the years, Bob Crosby has been a true scholar in the liberal arts tradition, believing that theatre should be studied and performed in the context of other fields of knowledge. As a teacher, scholar, theatre artist, and active member of the faculty, Bob has contributed much, and we are grateful.

Mr. President, it is my great pleasure to present to you Robert R. Crosby for the Adam Poe Medal and Founders Award.