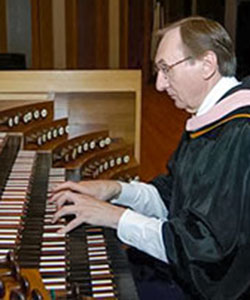 I am delighted to announce that the winner of the Welch Award for the Year 2004 is professor of music, Mr. Robert A. Griffith.

We know, of course, that Professor Griffith received a sound, well-rounded liberal arts undergraduate education because he graduated from Ohio Wesleyan University in 1962. He then went on to earn the masters of music at the University of Michigan and to do post-graduate work at the University of Illinois where he held a University Fellowship and Graduate Teaching Assistantship. He was a Fulbright Scholar from 1965-67, earning a Diploma in Organ Performance at the Royal Academy of Music in London. Professor Griffith has been heard in recitals in the United States, England and Germany and his performances here aired over the British Broadcasting Corporation and WOSU-FM. In 1983, he was one of only six organists, and the only American, invited to perform during the 1ooth Anniversary Celebration of the firm of Johannes Klais Orgelban in Bonn, West Germany.

Bob joined the Ohio Wesleyan University faculty in 1969. For thirty-five years he has taught organ, music theory, analysis and counterpoint. For nearly twenty­five of those years, he served as Chair of the Department of Music.

Professor Griffith is according to his students and in their words: “engaging,” “helpful,” “challenging,” “demanding,” “polite,” “patient,” “caring,” “considerate,” “delightful,” “amazing,” and “awesome.” He is the “epitome of good teaching,” “expecting of high standards,” “a prized professor,” “a wonderful resource,” and “a role model.”

As one student put it: “Mr. Griffith goes far above and beyond any teacher I have ever known. Along our journey through the twists and turns of music theory, his hand has always been there when you think you will never understand, and when you do understand, you can see how pleased he is just by looking at his face. Mr. Griffith does not just teach he cares.” Said another student: “Mr. Griffith is the best teacher that I have had. The thing that I think is best about him is that he holds us responsible for everything we have learned all the time. He can explain things in many different ways, is always patient with students and their questions, and offers to provide extra help. He is what every professor should strive to be.”

And, finally, one student spoke for many when writing: “The Music Department should search for a drug to sustain Professor Griffith’s life in good health forever; these four semesters with him have been the most amazing of my life; he should teach forever.”

Bob, that’s our hope too! Congratulations!