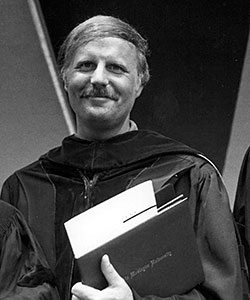 “Professor Louthan is an accomplished scholar, a twice-decorated Professor of the Year, and an extraordinarily talented academic leader,” President Warren said. “He brings to this assignment experience in the Ohio Wesleyan administration that stretches over 15 years. He and I have worked together since 1984 when at various times he has served as executive assistant to the president, acting dean of the college, dean of the college, and acting provost.”

Louthan received the unanimous recommendation of a campus search committee, which reviewed 129 applicants.

“I can think of no one better prepared to take on these responsibilities than Bill,” Warren added. “He was clearly and without question the ideal choice.”

As provost, Louthan will be Ohio Wesleyan’s chief academic officer.

The McKendree Professor of Politics and Government at Ohio Wesleyan, Louthan was named dean of academic affairs and acting associate provost in 1991. A faculty member since 1972, he served as Ohio Wesleyan’s acting dean of academic affairs twice, in 1977-78 and 1985-87. He was associate dean for planning in 1983-84 and chairperson of the politics and government department from 1978-84. In 1984-85, he also served as part-time executive assistant to the university president.

In addition, Louthan has served on numerous Ohio Wesleyan faculty committees, including the committees on university governance, academic policy, and faculty personnel.

Louthan’s scholarly work includes publishing three books, the most recent of which, “The United States Supreme Court: Lawmaking in the Third Branch of Government” (Prentice Hall, 1991), he is currently revising for a second edition. His other books are “The Politics of Justice: A Study in Law, Social Science, and Public Policy” and “The Politics of Management Morality: A Value-Critical Approach to Political Corruption and Ethics Policy.” He also has published numerous articles and book reviews.

A winner of Ohio Wesleyan’s two highest teaching honors – the Sherwood Dodge Shankland Award for the Encouragement of Teachers in 1977 and the Bishop Herbert Welch Meritorious Teaching Award in 1983 – Louthan earned his bachelor’s, master’s, and doctor’s degrees from Ohio State University. He has also taught at American University in Washington, D.C.

A native of Akron, Louthan resides in Delaware with his wife, Leslie, and son, Mark. His daughter, Lauren, is a senior at Ohio Wesleyan.