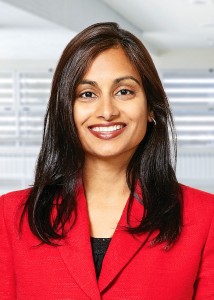 Dr. Laxmi Mehta is an Associate Professor of Medicine in the Division of Cardiovascular Medicine at The Ohio State University.  She holds the Sarah Ross Soter Endowed Chair in Women’s Cardiovascular Health and is the Director of the Women’s Cardiovascular Health Program.  She is the first female President/Governor of the Ohio Chapter of the American College of Cardiology (ACC) and has previously served two terms as Secretary/Treasurer for the Ohio-ACC Chapter.  Additionally, she previously served as President of the metro Columbus Board of Directors for the American Heart Association (AHA), and now currently serves as a member of the AHA’s Great Rivers Affiliate Board.  She sits on several national committees for both the American College of Cardiology and the American Heart Association, including previously serving on the Women in Cardiology Committees for both organizations.  She was recently selected to be the Vice-Chair for AHA’s Cardiovascular Disease in Women and Special Populations Committee.

She specializes in women’s cardiovascular health/prevention and cardiac imaging.  Her clinical and research interests include obstructive and non-obstructive coronary artery disease in women.  She is an educator and media spokesperson regarding women’s cardiovascular disease and prevention.  Dr. Mehta recently chaired the AHA’s first ever scientific statement on acute myocardial infarction in women.  She received the 2016 AHA’s Great Rivers Affiliate Distinguished Achievement Award for her “valuable contributions to the lifesaving mission” and the ACC’s Inaugural Excellence in Advocacy Award. She was chosen by Business First Magazine as one of Columbus' Top 40 under 40 in 2010 and honored as one of 12 women for the 2012 Women for Economic Leadership (WELD) Women You Should Know Calendar Honoree.  She is a Fellow of the American College of Cardiology and the American Heart Association. She received her medical degree from Northeastern Ohio Universities Colleges of Medicine and Pharmacy and then completed her Internal Medicine residency training and Clinical Cardiology fellowship training at William Beaumont Hospital in Michigan.